Winning.  That’s what we typically aim for and for sure we at Tenac love to promote your wins and top results.  It’s one sign that your training is going in the right direction and it’s a celebration of your excellence.

We do find motivation in winning and it is a good place to start.  However, it is an outcome and it’s very dangerous to put all your hopes and dreams upon winning. That possible result can be affected in so many ways from mechanicals to weather to sickness to someone just being faster than you on that day.

This past summer at Leadville, athlete Rose Grant and I sat down the day before the Leadville event to go over her strategy one more time.  We had talked several times about our plan. 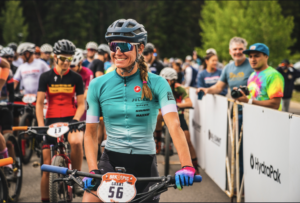 Our plan was for Rose to have her best performance and then let race results unfold as they would.  This plan also relied heavily on Rose’s ability to pace herself and to know what was too hard, especially early in the race.  We relied on her ability to eat and drink well and her patience.  We had also practiced all these things in previous training sessions and a recent race.

While discussing, we slipped several times into thinking how much she (and me) wanted her to win.  Ultimately, that’s what we are there for but we also knew her best performance would put her in a position to win.

We did discuss her competitors.  Since she races most of them on a regular basis, we knew some of their strengths and weaknesses and could do some modeling of how the race may go.  It’s good to put forward possible scenarios so you can see them in your mind’s eye previous to the race. This helps you to correctly react to what actually happens in the race.

Racing your race is a key to your best performance especially in longer races where tactics play little into the end result.  However, this is very difficult to do when racing your peers.  Have you ever seen one of your competitors attack or ride away from you and your first instinct is not to follow?  It’s very difficult. It’s an act of putting your ego in your pocket and remaining true to your plan.

Rose was able to do just that as her competitors rode away from her on the first climb of Leadville.  Hearing that she was minutes behind at the first feed zone, I must admit I had a twinge of worry but also believed in Rose’s strengths.  By the next feed zone, she was less than a minute behind and by the top of Columbine she was in a small group of the top women.  From that point, tactics came into play.

Rose stayed within herself and if possible knew to hold back as the climb up Powerline would further define this race and her best performance.  Starting the climb, she fell behind a bit but within a few minutes, she was leading the race for the first time.

Still needing to pace herself, she used her continued discipline to ride her pace while creating separation from the other women.  She continued with this to the end and even had enough energy to find another gear and speed to the finish.  She set her best time ever for the course. She had her best performance.  And she won.

This focus of being your best is what we call #BeAChampion. The ancient Greeks referred to it as Arete which means “Excellence.”   Greek competitions were held as an opportunity to be your best in honor of the gods, local heroes and ultimately yourself. Do note, they were not trying to be “the best” but to be “best”. They found virtue in the struggle and striving to be your best self.

So I ask you in 2022 to focus on your best self instead of winning.  Aim for that self mastery and maximize your potential.

PS>Reading this over, I do realize racing your best race can be different for different people and even different for the same person under different circumstances.  Ask Rose about her strategy at Iceman Cometh.  We again focused on her racing her race, setting her pace and racing her strengths.  She raced some of the same women from Leadville but we did change how she raced to get the best out herself and had the same end result.